About Destiny Devotionals | Miracle of Salvation

My name is David Weatherred and the biggest miracle in my life is salvation. I have been a Christian since May 6th 1985 when I accepted Jesus as my savior believing that He gave His Life for me and everyone in the world. The testimonies I am giving below are just a small part of the miracles I have experienced as a Christian.

When I was in high school I began to feel the pull towards the wilder side of life. I did many crazy things as a young man on the wrong path without guidance from Jesus. At one point in my wilder days I let a supposedly tame African Lion ride in the back seat of my car, which gnawed on the back of my head while I drove the car to my Aunt’s house in Fort Worth Texas. There were many crazy experiences and some very dangerous, but Jesus had a plan for my life and was waiting with open arms to receive me.

After I devoted my life to Jesus, I started out in a wonderful Baptist church trying to believe and act like what I thought the Bible was saying a Christian should be. Since all my life before receiving Jesus I had been told the dos and do not dos, I was attracted to the 10 commandments. I didn’t understand that the laws the 10 commandments teach were not part of the Christian life. The Christian life is about love and grace and not legalism. This lack of understanding caused error in my life and to some extent caused faith to become void. When a Christian is under the “Law of Moses” it stresses them and that is why the Bible calls “the 10 Commandments” the ministry of death (2 Corinthians 3:7). But thank God where the Law points out our sins, grace is much more pointing to our freedom of condemnation from our sins. This is so grace might reign in our life through the gift of righteousness bringing eternal life through Jesus Christ and not the Laws and Commandments. (Romans 5:20).

I knew something happened to me on that day, May 6 1985, that I couldn’t explain; that was leading me into a better life. I enjoyed being a Christian and going to church, but when I first became a Christian there were several things I saw going on in Christianity I didn’t believe or understand, especially the miracle healing I was seeing on Christian TV channels. I would ridicule those things that I didn’t think could happen anymore. I didn’t believe a Christian could do or see miracles any longer and it had passed away with the Apostles and Jesus era of history. Boy was I wrong.

First Miracle as a Christian 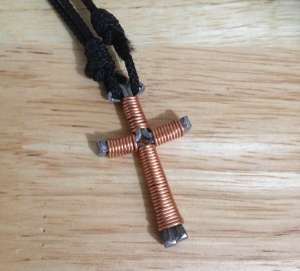 About a year after I became a Christian, my wife came down with a serious heart problem and the doctors were talking about open heart surgery. The doctors did tests all week and they told us to come back on Monday and they would let us know if they would do open heart surgery. That Saturday we went to a Bible study and a preacher there laid his hands on my wife’s back and prayed for her. That kind of bothered me since I didn’t believe in miracles, but I didn’t say anything. When we went back to the doctor on Monday I sat out in the waiting area and my wife went in to see the doctor. Several hours later the nurse came out and told me the doctor wanted to speak to me. I had no idea what was going on but God had given my wife a new heart when the preacher laid his hands on her and prayed for her. The doctor was totally baffled and said all the x-rays were different now than they were the week before. He said he just couldn’t understand what happened and I was so shocked I didn’t tell him. Well, that began my trek to find out more about God, and how a Christian in this day and time could see miracles, and know more about Jesus who had just done that miracle for us.

Second Miracle as a Christian

After seeing that God had performed a miracle healing with my wife’s heart, I started looking for more information about why this happened and how I could see it happen again. The Baptist church we were going was a wonderful church but didn’t really understand Jesus was the same today as he was back in history, so we started attending a church that believed in miracles. This new church was in Burleson Texas, called The Stepping Stone Church, which is now the Lighthouse church. I played guitar and had made friends with the leader of the children’s church. I was asked to play my guitar on Sunday morning’s in the children’s Church. One Sunday morning in 1987 Ken Greene came to our church to hold revival meetings for one week.

The first Sunday was a miracle service; as usual I was playing my guitar in the children’s church. When the time came for church to end someone came to the children’s church and asked us to keep the kids in there longer because the miracle service was being extended. Sometime later a lady I knew very well name Diana Autry came to pick up her niece and told me that God had capped her tooth in the service, and she showed me the cap. Being cordial I said to her: “that’s nice”… (But in my mind I was thinking that just didn’t make sense to me. Why God would put a cap on a tooth when He could just put a new tooth in there). I was pondering on lots of thoughts racing thru my mind and soon my wife, Debbie came over and was ready to go home. She said: “Did you hear about all the miracles that happened in the service today?” I told her what Diana said… Debbie asked if we were coming back tonight for there was another miracle service then too. I said no, I didn’t want to come back while Ken Greene was there because I didn’t believe that God would cap a tooth or fill it. I couldn’t understand why God would do that; to me the miracle would be God just replacing the tooth. Debbie said: “I have a bad cavity, (which I also knew about), and if God is fixing teeth tonight in the miracle service, I want to get mine fixed.” I said: “you can go by yourself I am not going.” I can be pretty stubborn at times and I couldn’t make sense of the miracle teeth repairs in my head so I stayed home and Debbie went to the miracle service. Later that evening I was expecting Debbie to be home around 8:30 or so, normally our service is over by 8:00pm and still close to 10:00pm Debbie was not home, so I went to bed. At some time after 10:00pm Debbie came home running thru the house and said: “David get up, God has filled my tooth!” I jumped out of bed and got a flashlight to look at her tooth and there was the filling… I knew about her cavity before she left and now it was fixed in the miracle service by God with a filling. What could I say…? I was wrong and I had tried to dictate the way that God should perform a miracle with my stubborn opinions. I was quite excited to say the least; to see a miracle like this is something that will change you’re thought process in every area of your life. I was so excited I couldn’t hardly sleep and wasn’t about to miss another miracle service during the revival being held at our church. For years after Debbie’s miracle tooth filling I was very selective with whom I told about this. I figured that most people wouldn’t believe me, even though this miracle and the other miracles can be verified by the 400 people who were there, and by the 20 to 30 people whose teeth were fixed, but still I just kept it to myself. In the last few years I was thinking about the man with the withered hand who Jesus healed, the blind man and many others; I think they wouldn’t have kept quiet about the miracle that happened to them. In fact even when Jesus told them to not tell anyone about the miracle they received, they did it anyway, and Jesus’ fame was spread throughout the land Luke 5:15. So I decided since I am a Christian to not keep any miracle a secret, I tell everyone now even as I am doing here about this miracle tooth filling.